Atlanta: Home of Leaders & Entrepreneurs
Use Scan QR Code to copy link and share it

Georgia State’s Leadership Development Office and the Entrepreneurship and Innovation Institute continued their “Leadership in the City” series on September 20, featuring a panel of seasoned entrepreneurs and leaders moderated by ENI’s Director Jennifer Sherer.

Amari Ruff, former CEO and founder Global Optic Telco, has raised over $3 million in venture funding, was named among the “Top 10 Startups to Watch in 2018” by Venture Atlanta, and received the “2018 Innoventure Award” by the Atlanta Business Chronicle. His most recent startup, Sudu Logistics, was founded in 2014 and addresses the challenges of diversity with minority-owned carriers by acquiring large contract opportunities.

A natural risk taker, Ruff focused on the importance of taking risks as an entrepreneur. “I jump out the airplane, then build my parachute,” said Ruff. He highlighted this ability as a key characteristic of successful entrepreneurs. To help mitigate financial risks though, he encouraged students to find accelerators and to utilize fundraising platforms like Kickstarter to securely raise funding to support their entrepreneurial ventures.

Stefanie Diaz founded “Women Only Entrepreneurs” (W.O.E.) in 2017 to host events that can only be described as where “Ellen meets Oprah for women entrepreneurs.” With over 130,000 listeners per episode, Diaz has shared her insights on the “Mastermind Your Launch” radio show, a series featuring Atlanta technology entrepreneurs. Between these efforts, Diaz was recently named among “Atlanta’s Startup Women” by Hypepotamus and has served as a 3-time mentor at Techsquare Labs’ Atlanta Startup Battle.

“You lose the spirit of creativity and imagination if you’re too focused on the outcome,” said Diaz, “Don’t fixate success around a specific outcome.” She focused on the importance of defining failure, noting that any forward progress should be considered a success. “It hurts me when people have a great idea but are too scared to pursue it,” Diaz added, ultimately acknowledging the challenges of taking risks as an entrepreneur. “Be a bold voice. Be a strong voice. There’s so much noise out there. Capture their attention,” said Diaz.

Marguerite Pressley Davis, founder and CEO of Tulle La La, a globally-recognized retail tech company awarded the Modern Luxury Diamond Award for “Best Wedding Technology”. Her former roles include working as a financial Senior Analyst at Goldman Sachs controlling a multibillion-dollar portfolio of investments, with the Economic Opportunity Initiative at the Clinton Foundation, and as a manager at Deloitte Consulting, leading multi-million dollar merger and acquisitions deals. Davis serves as a mentor for ATDC, and DigitalUndivided start up communities.

“I always knew I was going to be an entrepreneur,” said Davis, where she shared about her experiences book keeping as a six-year-old for her father’s landscape company. Fast forward to Davis beginning her career on Wallstreet consulting, where she experienced challenges planning for her upcoming wedding. “Being a businesswoman at heart,” said Davis, “I wanted to create a solution.” When building her wedding startup, she noted the importance of “knowing your blind spots,” where defined failure as not finding outside talent to fill those voids. From building the team to validating the customer, “You have to have inner confidence that says you can do it and you will do it,” said Davis.

Seth Radman cofounded Crescendo, a music technology startup that supports musicians through interactive training software powered by AI. His first company, Plutonium Apps, has built and launched 30 mobile apps for startups and corporate customers including the Atlanta Hawks, UGA, and BrandBank. A familiar face to ATDC and TechSquare Labs, Radman has spoken at SXSW and TEDx Georgia Tech.

“I’ve probably known myself the longest. That sounds silly, but it’s true. I just find it riskier to work for other people that don’t know me as well,” said Radman. Even when working for yourself as an entrepreneur, he also highlighted the importance of maintaining a reliable record and work ethic, saying that “You don’t have to be perfect, but keep to those commitments.” Radman shared that to stay focused and efficient, he memorizes a deck of cards every day.

“There’s always a starting place. The start is the hardest part,” he added, whether that applies to memorizing a stack from 15 to now four minutes or launching a business. Radman encouraged students to go ahead and take that entrepreneurial leap, saying to “Do multiple iterations when launching. Don’t wait for a perfect launch.”

From sharing their insights on customer discovery, funding options and everything in between, the panelists concluded on an equally central concept: self-care. “I find I get more done if I do stuff for myself,” said Radman, sharing that he schedules nothing before 10 A.M. (“Except when Shaq was in town!”) to read a book a week. The panelists all agreed on the importance of taking breaks from their entrepreneurial hustles to regroup and maintain a healthy lifestyle, especially as entrepreneurs and leaders. Thank you again to our panelists and moderator for sharing your insights! 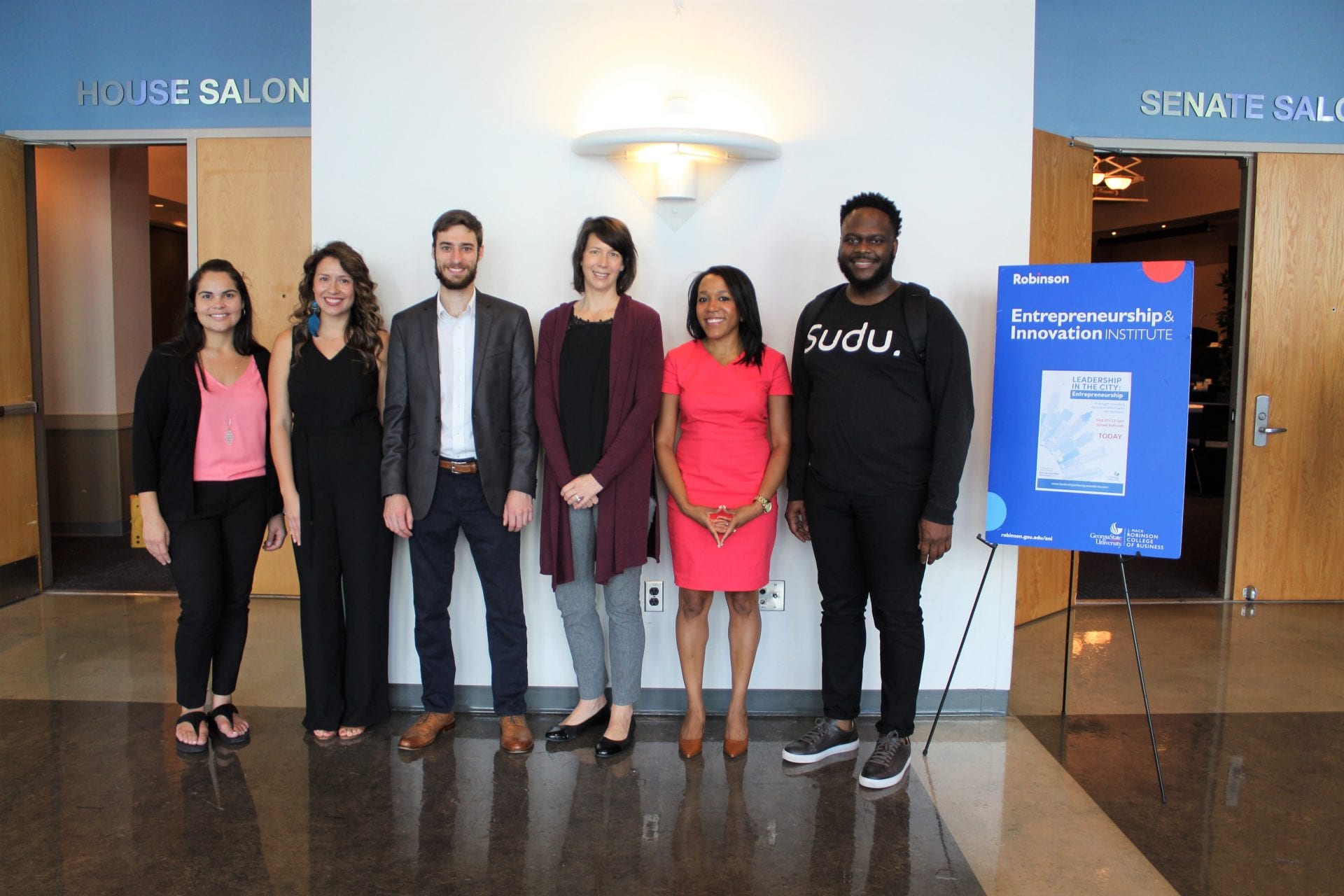 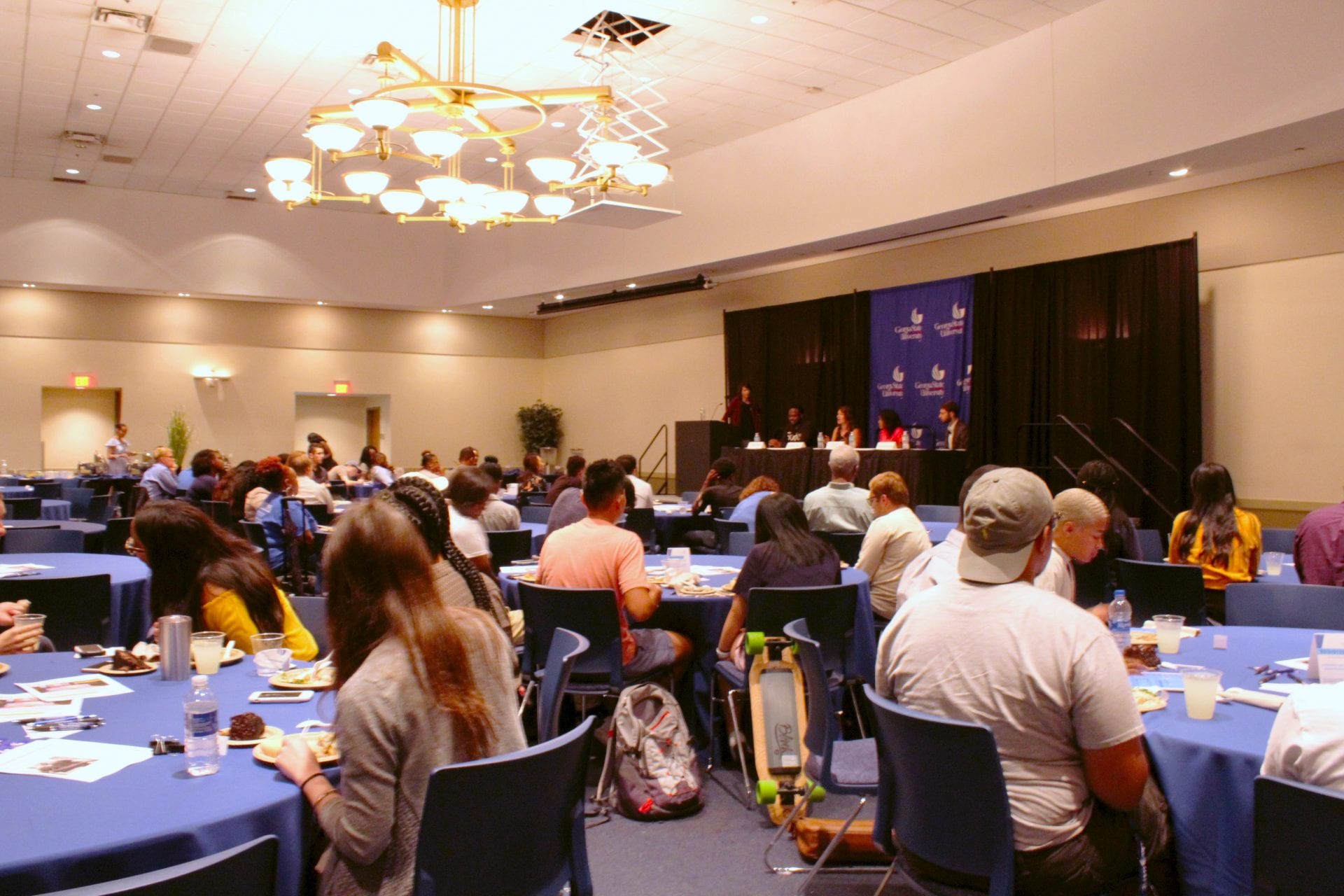 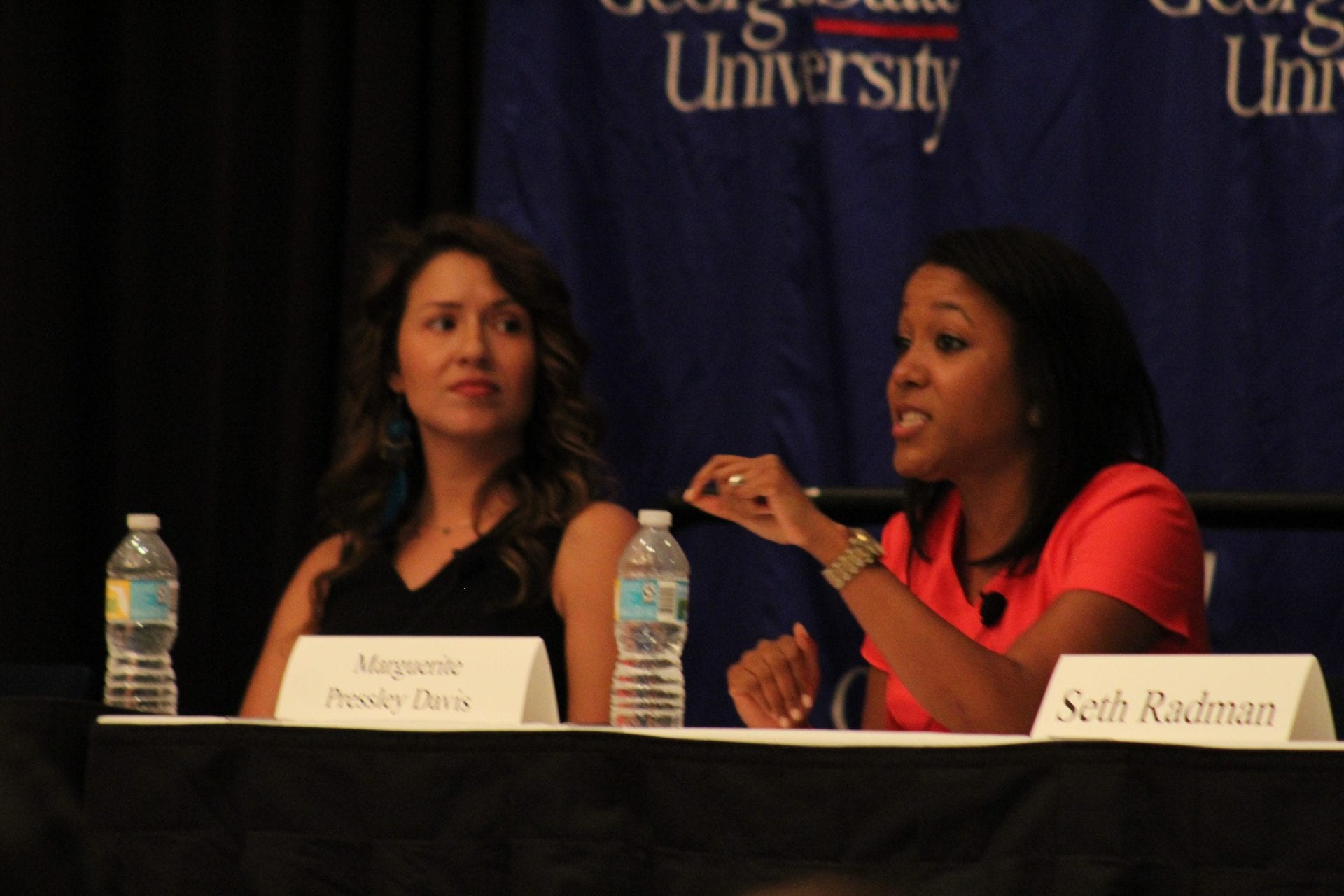 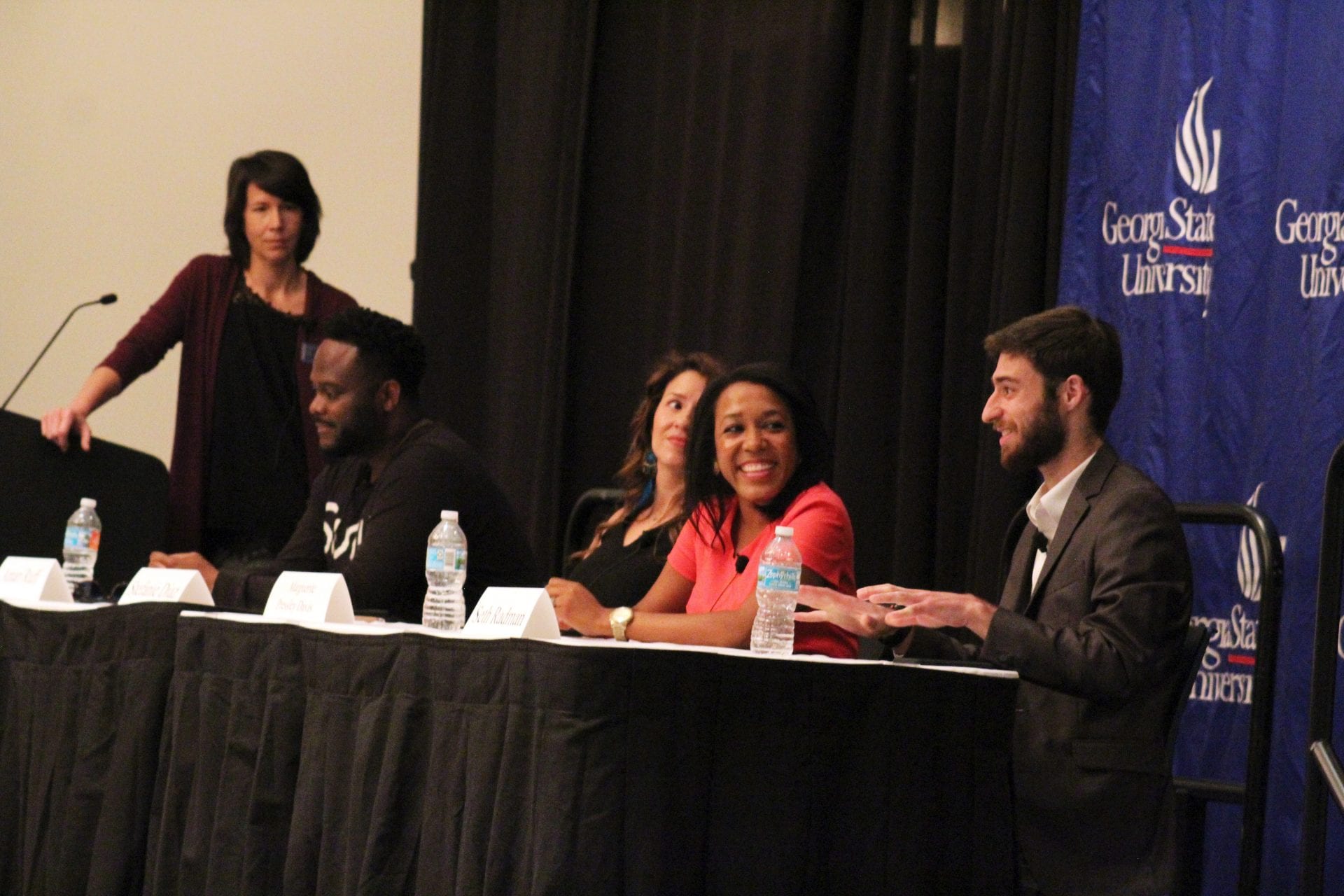 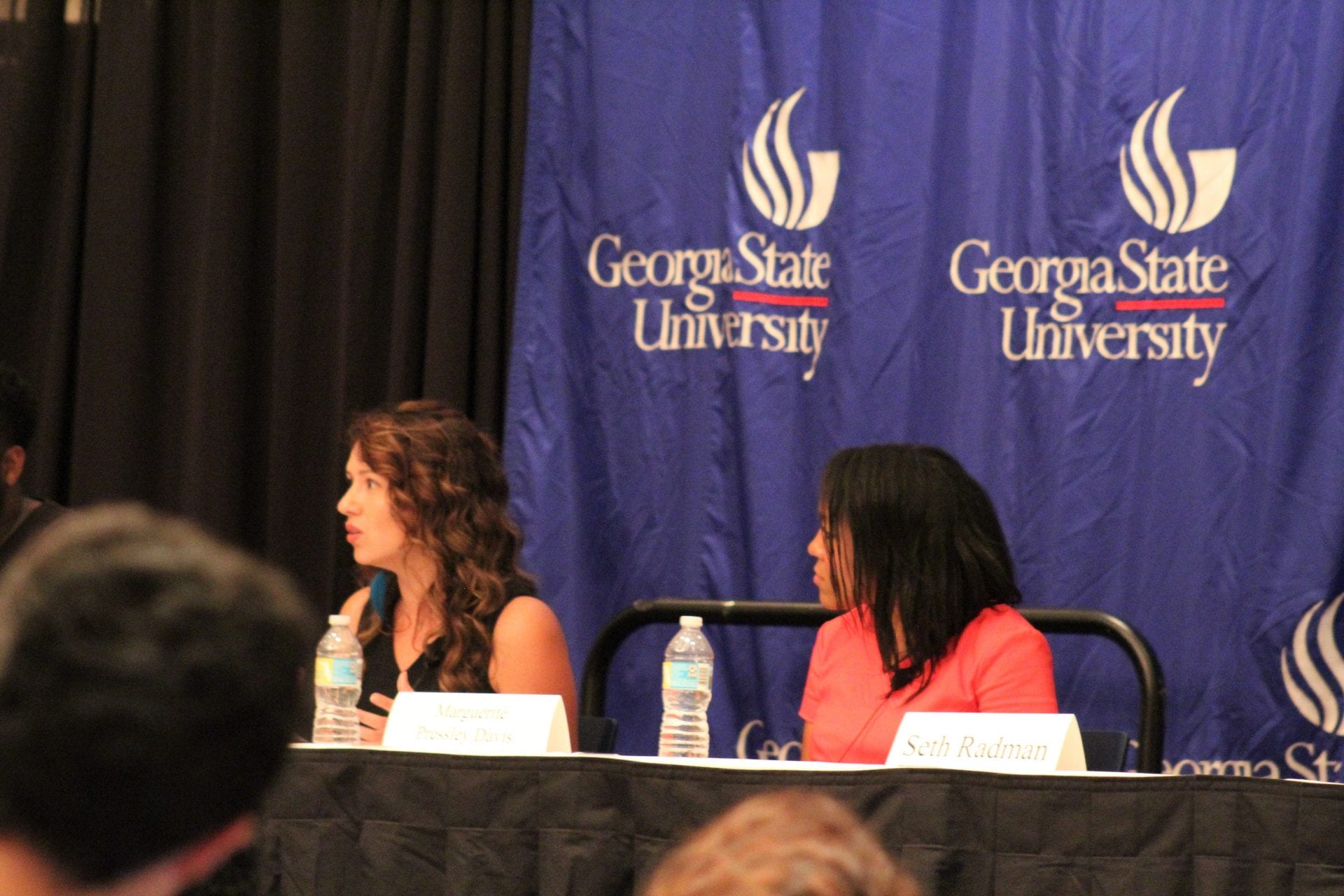