“A key to success is to start before you are ready. Be sincere and passionate about what it is that you want. Then go out and get it.” – Santi George

Born and raised in Atlanta, Santi George set out to see the world, completing two study abroad programs during her collegiate career at Georgia State.

George has traveled to over 10 countries and has learned four languages, including French and Portuguese when she lived in France and Brazil.

Now graduating with a Bachelor of Arts in Film & Media and a minor in Entrepreneurship, George’s passion for cinema truly has reached across the world.

While in France, she attended the Cannes Film Festival, world’s largest film festival. Through her internship with the Hollywood film company CineTel Films, she witnessed the premieres of box office movies like “Rocketman, 2019,” “Once Upon A Time In Hollywood, 2019,” and “Parasite, 2019.” 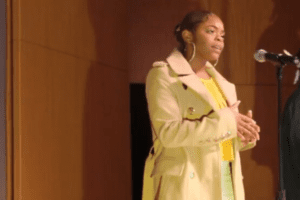 She credits these industry experiences and her entrepreneurship studies for inspiring her to write a book and to start her own production company.

While actively involved abroad though attending workshops panels with Hollywood’s Sylvester Stallone and others, George also made every effort to take advantage of ENI’s programming when on campus.

“My favorite ENI memory was attending the H.J. Russell Motivational Author Talk featuring entrepreneur Michael J. Coles,” said George, sharing her appreciation for receiving a copy of his book Time To Get Tough and having it signed after a conversation with Coles.

Having traveled the world, George is eager to share her knowledge of culture and language. She plans to leverage her film and entrepreneurship background to run a business motivated by creating compelling and diverse films.

Congratulations again to George for all that you have accomplished at Georgia State and beyond!

Share your congratulations with ENI seniors like Santi George by tagging @ENIGSU and using the #ENISenior2020 hashtag on social media.

Take the time to read the other inspiring ENISenior2020 stories in this series: Kiara Henry and Sharee Stephen.