By Eddie Frausto and Deniece Griffin

Each year, the Sheth Lecture on Social Entrepreneurship offers a keynote speaker from a distinguished social innovator and/or entrepreneur and provides a forum for sharing ideas and practices of social innovation and social entrepreneurship.  Georgia State University was pleased to present Nobel Laureate Professor Muhammed Yunus on March 24, 2020. 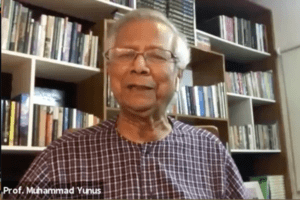 Nobel Laureate Professor Muhammed Yunus is a social entrepreneur who founded the Grameen Bank, alongside 50 other companies. The father of social business and microcredit himself, Yunus has supported the lives of thousands of people in low socioeconomic status for decades. This livestream conversation reveals years of his personal and professional ventures in social entrepreneurship. Professor Yunus’ view on social entrepreneurship includes the notion that it will revolutionize the world going forward in the Post Corona-Reconstruction.

Professor Yunus stated that the reason he got into social entrepreneurship was to help people. While he did not have a background in banking, he was still able to create his own financial institution, Grameen Bank. The strategy he implemented was simple, to reverse the financial system design which was already established. At the time, banks were predominant in most cities, so he made sure to do the opposite. He made his banks for people in rural areas who did not have access to traditional banks, which provided them access to financial resources. Another innovation in his design included a trust-based system which lacked the traditional use of legal procedure and related documents. His philosophy and system aim to see people as people, not for capital gain, and truly support them instead.

A world post COVID-19 is a world that Professor Yunus is very optimistic about. Yunus uses social entrepreneurship to create a sustainable business model that will continue to use money to support people and to gain money in the process. By rolling the profits back into the business, he is able to help more people, “Making money is happiness, and helping people is super happiness!”

Professor Yunus proposes the idea of closing the wealth gap to tackle poverty. He disagrees that going forward we should have an extreme concentration of wealth where 1% of the world own 99% of the wealth. The wealth in the world is not owned by common people, so people need to be brought closer to wealth to combat poverty. The more people who can access wealth can become entrepreneurs and start to build their own wealth. “People don’t create poverty, the banking system that people created is the cause of poverty.” Professor Yunus believes that the time is now to reconstruct the economy and banking system to alter the course of humanity.

This series is endowed by Jagdish N. Sheth, Ph.D., and his wife Madhu Sheth. Dr. Sheth is the Charles H. Kellstadt Professor of Marketing at Goizueta Business School at Emory University. With over 50 years of experience in research and teaching, he is known nationally and internationally for his scholarly contributions in consumer behavior, relationship marketing, competitive strategy, and geopolitical analysis.