Each year, the Sheth Lecture on Social Entrepreneurship at Georgia State University offers a keynote speaker from a distinguished social innovator and/or entrepreneur. We were pleased to present Joe Madiath on April 13, 2021. 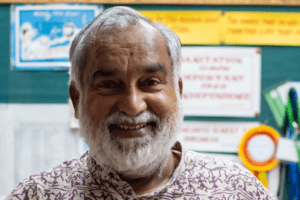 Joe Madiath is a social entrepreneur and the founder of Gram Vikas based in India. He noticed that rural areas in India had limited access to clean water. With the lack of resources, he decided to do something dramatic to positively impact his community. This live stream conversation revealed years of his personal and professional ventures in social entrepreneurship.

Gram Vikas, which translates to ‘village development’, is the organization that Joe formed to give young people more access to jobs in the market. Community-based entrepreneurship is a core concept of Gram Vikas, so he found a social problem that everyone in the community could come together to solve. He identified that the source of water in the village, which everyone used for bathing, drinking, and cleaning was not put through a filtration system. Gaining access to clean water became his goal. He began to think of a sustainable system that he and his team could develop throughout the village. The solution was each village would ask for 1000 rupees from each family. The accumulation of this money allowed young people to be trained on how to create sanitation solutions in addition to providing clean water to be routed through a filtration system in the village.

To ensure that all of the community’s needs were met, a committee was established with equal gender representation.  Issues could be brought up and tackled, specifically issues on government and sanitation. Women became strong advocates as they spearheaded the sanitation system project in their village. Gender dynamics continued to shift when a village leadership position was vacant and a women became president for the committee for the first time.

Today, Gram Vikas works with schools to train young adults to become ready for the workforce. Ensuring that people have access to employment will eliminate some economic barriers that disproportionally impact low-income families. Also, Gram Vikas focuses its assets on working with the government and community-based organizations for economic relief with COVID-19. Joe continues his work to bridge the wealth gap across social classes. Going beyond the original goal of just providing access to clean water and knowing that individuals now have a better life is gratifying, noted Mr. Madiath.